skip to main | skip to sidebar

I am fascinated by the Vizsla's history.  It is a mystery novel that spans ten centuries.  The map below was the Hungarian - Austrian Empire one hundred years ago.
The empire was much bigger than the country we now know as Hungary.  The Vizsla was THE hunting dog of royalty in this vast empire.  It was a capital offense to be caught trying to smuggle a Hungarian Vizsla out of the empire. 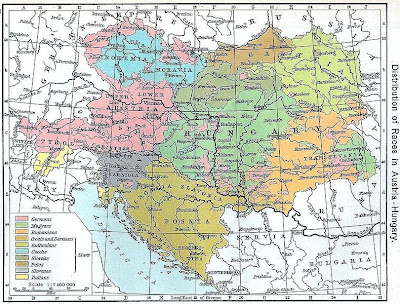 Borrowed from Vizsla Puppies Blog:
http://vizslapuppiesblog.com/page/2/
"Hungary is famous for its sheepdogs. These include the Komondor, the Puli, the Pumi, the Mudi and the Kuvasz.
But within the breed group of Vizsla, only 3 sub-categories can be found. Namely, the German Vizsla, the Italian Vizsla ( a.k.a Bracco Italiano) and the Hungarian Vizsla. The Hungarian Vizsla is the most-well known and thus the most well-loved as well. Within the famous Hungarian breeds, the Hungarian Vizsla stands regally next to the Transylvanian Hound (a.k.a Pannon Hound), since it is not a flock guard, but rather a hunting dog – unique to all the Hungarian dog breeds! 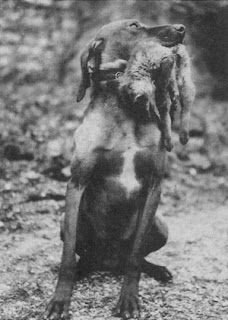 It developed independently from all the other Vizsla breeds, and its origin dates back to when the Magyars conquered the Carpathian Basin at the end of the 9th century. Hungarian tribes that settled in the Carpathian Basin brought dogs with them and these in turn mixed with hunting dogs of the Slavic people living in the occupied territory at that time. The dogs that evolved were the ancestors of today's Hungarian hunting dog breeds, namely the Hungarian vizsla and the Transylvanian hound.
Separation of the two breeds occurred in the 11th century and when the Turks conquered Hungary in the 16th century, the Vizsla developed further by crossing with the dogs of the Turks: namely with the dog breed called the Sloughi. Unfortunately, by the end of World War II, much of the Hungarian Vizsla population was destroyed. A few of these dogs were taken to Western Europe and America.
The original book of origin was also lost in a fire, so the origin of some of the remaining facts became unknown.

But top quality European breeders have perpetuated the gene-pool of this beautiful and regal breed that is very much loved outside of its native Hungary as well!"

About the Hungarian Vizsla


It is likely that the populations that evolved were the ancestors of today’s Hungarian hunting dog breeds, that is, the Hungarian vizsla and the Transylvanian hound. This ancient type is nowadays called a Pannon hound.

Separation among these breeds came about as a result of a selection caused by different uses, presumably during the 12th-14th centuries. The world “vizsla” appears in written material dating back to the 1300s. Early in the 16th century, people in mansion houses were involved in breeding vizsla – which is proven by several documents found in different archives. Therefore, we know that a vizsla type dog was used to hunt small game even before the time of Turkish occupation of Central Hungary in the 16th-17th centuries. During this Turkish occupation, the vizsla most probably also mixed with the Turks’ dogs, including the sloughi. The practical importance of the vizsla increased with the spreading of firearms in the 18th century. Of the ancient Hungarian noble families, many included passionate hunters, who also bred vizsla. Worth mentioning in this respect were the Zay, the Batthyány, the Nádasdy, and the Komlóssy families. In the 19th century, the Hungarian vizsla was widespread in northern Hungary (today southern Slovakia), Transdanubia, as well as in Szabolcs and Bihar counties in the East. Unfortunately, its number substantially decreased by the end of the century.The purposive, sports-like dog breeding saw prosperity in the 1860s Europe-wide. It was then that the English and German types of vizsla appeared in Hungary – to the detriment of the ancient Hungarian vizsla. The number of Hungarian vizsla was greatly reduced. In 1916, Tibor Thúróczi wrote an article in the Hungarian dog journal “Nimród” with the title “The old Hungarian yellow vizsla”. This article evoked a lot of response, with many people voicing their opinion in favour of the old Hungarian yellow vizsla. The movement was headed by Dr. Kálmán Polgár, Károly Bába and Béla Kerpely. It was in 1920 that – under the auspices of the Hungarian Kennel Club – the Association of Hungarian Vizsla Breeders was formed, and operated as a section of the National Vizsla Club.

A dog could get into the book of pedigree kept by the Hungarian Kennel Club only after judgement by a special commission, if that particular dog proved to be suitable by its look and at a hunting test. The first registered vizsla included Witti (see picture) Honvéd, Laura and Pax…

Following an extensive debate, the standard was developed with the leadership of Loránd Morvay, Dr. Emil Raísits, Jenő Puntigám and Béla Kerpely, which was accepted by the National Vizsla Club in 1928. The FCI (Federation Cynologique Internationale - World Canine Organisation) recognised this breed in 1936, and registered the standard under number 57.

The working features of the vizsla were characterised like this: ... the most obedient and teachable of all the vizsla types ... it follows instructions very well ... it is due to its unconditional obedience that it searches as wide of an area as we want... there is hardly a Hungarian vizsla that must be forced to retrieve ... with regard to tracking, considering its origin as a bloodhound, it is a real master. (Gyula Csizmadia ) The working conditions were set by the Competition Regulations and accepted in 1936.

The first large breeds were the Végvár, Gyöngyöspuszta and Kapos kennels. The famous vizsla trainers, who were also recognised abroad, like Endre Félix or Balázs Ötvös, did a lot for the popularisation of this breed. The creation of the breeding farm in Hévíz in 1937 produced a great boost in breeding. The owner of the farm was Duke György Festetics.

In 1936, the book of pedigree was closed. Therefore, only the pure blood descendants of dogs admitted into the book until that time were allowed into breeding. By the early 1940s, there were approximately five thousand thoroughbred Hungarian vizslas in the country.

Unfortunately, by the end of World War II, much of the Hungarian vizsla population was destroyed, a few of these dogs were taken to Western Europe or America. The original, central book of origin was also lost in fire, thus the origin of some of the remaining entities found was unknown. The National Vizsla Club re-launched the book of pedigree and began to reconstruct the breed. In this, great assistance was also provided by the state breeding farm established in Gödöllő, east of Budapest in 1947. In 1956, the Hungarian Kennel Club was recreated with the leadership of Mihály Kende, and it managed to settle its membership problems with the FCI in 1963. It was in 1966 that the FCI accepted the modification of the Hungarian vizsla standard.

In parallel with the improvement of the economic and political situation, in the seventies, the dog hobby began another development process that has not abated since. A perceivable change came about in the history of the Hungarian vizsla, as well. More and more hunting dog competitions of higher and higher standards were organised, and that had a favourable effect on breeding, too. Instead of the bulkier, bonier, skinny Hungarian vizslas with much tissue under the skin of the head, widespread after the War, it was the easy-build, dynamic Hungarian vizsla of galloping type similar to the ones dreamed up by Dr. Kálmán Polgár and his associates that came to the foreground, and which perfectly fulfil the hunting and competition requirements of our modern era.

[EXCERPTS FROM THE BREEDING REGULATIONS OF THE HUNGARIAN VIZSLA KLUB]
Posted by Rod Michaelson at 6:03 AM

Rod Michaelson
Life is not measured by the number of breaths we take, but by the moments that take our breath away.

Friends of the Red dog